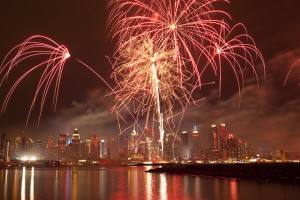 It just doesn’t get any better than Fourth of July fireworks in NYC. Photo by Anthony Quintano (Flickr)

It’s almost America’s birthday again, and if there is one thing that the Big Apple does better than anyone else, it’s celebrating the Fourth of July. What could possibly be more breathtaking on the Fourth than watching the annual fireworks extravaganza? Well, not much, but there are other July 4 traditions that equal the fireworks’ grandeur and fun, so you’ll want to check those out, too. What is the best way for New Yorkers to celebrate the Fourth of July? I have some suggestions that I think you’ll want on top of your list.

Let’s begin with the granddaddy of fireworks shows, not to mention NYC’s most popular July 4 celebration, and that is the Macy’s annual 4th of July Fireworks Spectacular. The show is held on the East River, and if you are in Brooklyn, Manhattan, or Queens, you can see the amazing fireworks flying off of the barges anywhere your view of the river is not obstructed by buildings. Some good places to watch the fireworks include the sections of FDR Drive that are elevated, Vietnam Memorial Park in Manhattan, Brooklyn Bridge Park in Brooklyn, and Center Boulevard between 48th and 49th avenues in Queens.

This annual July 4 celebration is not for the weak of heart or stomach. Every year, hundreds of people make their way to Coney Island and many more watch on television as gustatory competitors line up to see who can eat the most Nathan’s Famous hot dogs. You might not believe this, but this is one serious sporting event, with male and female competitors and qualifying rounds leading up to the final hot dog frenzy. New Yorkers take pride in their dogs, and it’s quite a battle over international competitors in an effort to ensure that a New Yorker is donning the champion belt and collecting the prize purse.

If watching tons of people shovel massive amounts of hot dogs into their mouths isn’t your cup of tea, another Fourth of July tradition in New York City is the annual Liberty Belle Extravaganza. This “vintage” celebration takes place at Hudson Terrace at 621 West 46th St., and you’ll be propelled back in time as you watch dancers and listen to orchestras and bands play patriotic music appropriate for the celebration. What are not so appropriate are the burlesque dancers, sure to bring a new twist on any July 4 celebration you’ve ever been to, and you can enjoy delicious barbecue at this event while overlooking the Hudson River.

This is one of my favorite events. If you’re a history buff, you’ll love the Fraunces Tavern Museum’s annual Revolutionary War walking tour, held on July 4 from 3 to 7 a.m. Many people don’t realize the critical role New York played in our nation’s fight for independence. We often associate the Revolutionary War with more famous people and events, such as Paul Revere and the Battle of Bunker Hill. But New York City has its revolutionary heroes as well, including Marinus Willett, and you can learn all about him and NYC’s involvement in the war by walking through history on this guided tour. What a fantastic way to celebrate our nation’s birthday: walking in the footsteps of the men and women who fought for our nation’s independence and gave us a reason to celebrate.