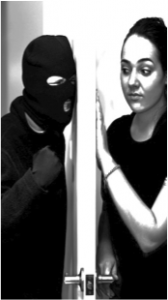 Don’t open the door to strangers.

A cleaner was working late one night, cleaning a doctor’s office.  Suddenly, she heard someone at the door, keys jingling trying to break in!!. The person was trying every key and the cleaner was terrified. She went to the door and asked whom it was, as she looked through the peephole and saw it was a man dressed as a security guard. She did not open the door and instead asked him what he wanted. When he heard her voice he jumped and yelled “I WAS LOOKING FOR A BATHROOM.” He then ran from the door. The cleaner was relieved he disappeared. She called her supervisor right away and told her what happened. Just keep in mind, never open the door to someone not authorized to be in the office in which you are working. We have no idea of this strange man’s intentions but the cleaner’s safety always comes first. Remember if you are on a job and something like this happens to you please do not hesitate to call your supervisor right away! This cleaner was very smart to not open the door.

How Another Cleaning Service Stole Our Job!

If Busy Bee kid had been at the job he would have been prepared!

One time one of our clients that has many stores throughout NYC had an emergency. Their basement had flooded and it was a mess! They asked for us to help and send as many cleaners as possible! So we 5 cleaners from different cleaners form different parts of the company so they could work together. We told them all that other Busy Bee cleaners would be there. Soon after, we received calls from the women, the other Busy cleaners never showed up…and our client had called another cleaning company! We called our client and asked her what section of the basement they wanted to work on since another company was there. The client was confused and assured us that we were the only cleaning service there. We called all the other women to see if they had arrived. All 5 women were there! The problem was they weren’t wearing their Busy Bee shirts and instead of working together they were working individually for 4 hours!!!!

These women could have saved themselves a lot of stress but just wearing their Busy Bee shirt. They would have recognized each other and worked together!