Posted on February 12, 2014 by Fatima Wiszniewski 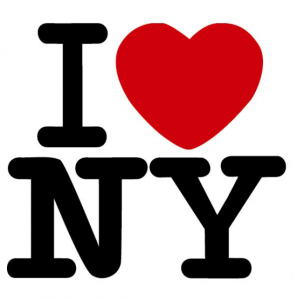 New York CIty is my Valentine.

Though many people fret over who their valentine will be when they are single, this year I know I already found mine: New York City, bee my valentine this year? you can say what you want about the holiday: that its built on mindless consumerism, that it is a day to make singles feel terrible, or that it is unnecessary as you should share your love for others year round. Well the history behind it is that Valentine’s Day began as a day of worship. St. Valentine of Rome was imprisoned for performing marriages for soldiers who were forbidden to marry and ministering to Christians who were under protection of the Roman Empire Legend says he healed the daughter of his jailor and before he was executed he wrote a letter and signed “Your Valentine”. The Saint’s day was not romanticized until Chaucer helped to make the tradition of courtly love flourish in the high Middle Ages. Then in 18th century England, lovers began buying gifts for each other as an expression of their love. Since the 19th century handwritten valentines have been given up for mass produced greeting cards. Though I could be considered a cynic, and have shared all the terrible feelings towards this holiday, this year I have found a love to share this day with. This year it’s official, even though this love has been around for years I’ve finally realized what it can offer me. New york City is my Valentine and though it cannot buy me flowers or whisper sweet nothings in my ear, this city can offer me the world. 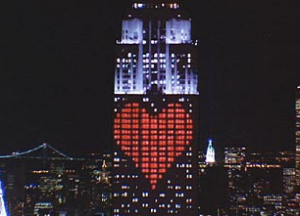 Love really is all around.

walking around you never have a dull moment, even doing the most mundane thing. Just the other day while walking to catch the R train home, I saw a bride and groom taking pictures in the snow. Often I have been surprised by the kindness that strangers can provide for others, like holding the subway door open for them, helping with directions and I’ve even seen someone help others carry suitcases up Subway stairs. Yes, it is a city and sometimes it stinks and makes my fall down (thank you ice) but even when it’s 20 degrees out the sun will still be shining and the possibilities that the city that never sleeps can offer you are endless. 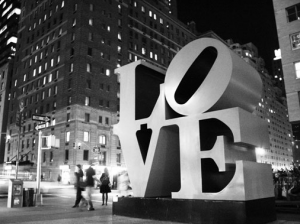 Can you feel the love?

Living here I have learned that I can get almost anywhere with $2.50 and I only need a few dollars to get pizza or halal at 2am. When I’m feeling alone, I can just get on the Subway at rush hour and be closer to strangers than I am to most my closest friends and even when I’m totally grossed out by the smell of urine on the street, that creepy sleeping man on the bus, or the cockroach I saw by the trash room, I know that when I see the city skyline, hear the church bells or crowds yelling form my office window, or even just the fabulously fashioned inhabitants I know that all the good outweighs the bad. New York City will always be in my heart, reminding me that no matter how poor, how alone or grossed out I am that New York City is beautifully infinite in what it can offer me.