Schools Back In Session, But Germs Won’t Be With These Tips! 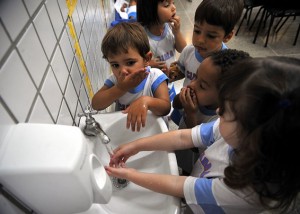 Teaching kids to wash their hands is the top way to defend against the “back-to-school plague.” Photo by Christian Hartmann (Wikimedia Commons)

When kids have to return to school after a long summer of having fun, they’re suddenly crammed into buses, classrooms, and hallways full of bacteria. From day one, their immune systems are under attack. Children tend to get a cold during the first month of returning to school. So many people are affected that some have taken to calling it the “back-to-school plague.” Our cleaning team certainly tends to get more calls at the beginning of the year for major cleaning projects due to so much illness.

There are many different ways to curtail this sudden wave of germs. Here are some good ideas for parents as they’re helping their kids avoid the “plague”:

Of course, other parents have other ideas, too. You can also make sure your child has had a flu shot, for instance. But here’s a final tip: Talk to the teachers. They’re the ones most often found with wipes and hand sanitizers and observing kids’ bad hygiene behaviors. Ask your child’s teacher if there is a way for you to help reinforce good cleaning habits at home.

This entry was posted in Back to school. Bookmark the permalink.