There’s Nothing Quite Like Christmas In The Big Apple

Posted on December 3, 2015 by Greg Wiszniewski 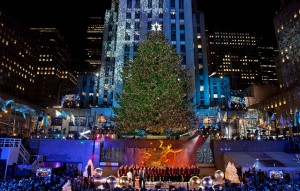 No city in the world celebrates Christmas quite like old NYC. Now, if you’re a local like me, you’ll probably avoid a lot of the ruckus of Manhattan throughout the month of December. But just because something is very well-liked by tourists doesn’t mean you have to run and hide. A lot of those things are well-liked for a reason, and if you’ve never taken the opportunity to stop and take in the holiday spirit of your own hometown, maybe this is the year you should.

On December 2, the massive tree in front of Rockefeller Center was lit during an event celebrated with live performances and observed by tens of thousands of people. But if you missed it, don’t worry; the tree will stay lit until January 6. In the meantime, you can enjoy a classic activity for holiday shoppers in the city and go ice skating in front of it. Just be sure to book well in advance. (If you miss skating at that rink, there are plenty of other places in the city where you can wow your date with your skating skills, too.)

Nothing quite says Christmas in the city quite like the Rockettes and the incredible Radio City Christmas Spectacular. These high-kicking, smiling dancers are as much a part of the fabric of the city as the Empire State Building (which is lit with green and red and worth its own viewing). It’s always fun to watch the show, even if you’ve been before. They’ll have new sets and the old routines that I love. The falling toy soldiers bit, for instance, is great to see in person! While you’re there at Radio City Music Hall, check out the giant ornaments they’ve installed. If you can’t get in to see the Rockettes, the less-known but equally awesome Winter Solstice Celebration is a lot of fun as well, and it takes place in a cathedral!

Window-shopping is a lot of fun on any day, but during the holidays, the businesses on Fifth Avenue and in many of the main walkways of the city pull out all the stops. Try to find a less-crowded part of the day and then take a peek at some of the incredible creations, which tend to get more ridiculously beautiful every year. My favorite is always Macy’s, of course.

Is anyone else really sad that FAO Schwartz is gone? Don’t worry though, because there are plenty of other places to go in the city if you want your kid to have a field day. Toys “R” Us is huge, and the official Lego stores are fun. But feel free to give the smaller places some love; they work hard to give your kid a great experience. I’ve heard really good things about Kidding Around and ToyQube. If you’re brave enough to go shopping in the city during the busiest times of the year, you’re probably brave enough to take your kid to this classic Christmas spot: Macy’s Santaland. If your child wants to talk to the big guy, this is the real big guy! (Trust me: I’ve seen Miracle on 34th Street!)

You know this is a great city for the holidays because this is nowhere near a comprehensive list of all of the really cool things you can do in the city during this festive time of year. Every local concert house has their own great performances at this time of year, and you can find some really fun activities off the beaten path, too, from the New York Botanical Garden Holiday Train Show to the various sledding days in city parks to the spectacle of the Christmas lights at Dyker Heights in Brooklyn. If you don’t go to the tourist hot spots, that’s OK. Just be sure to take in some of the magic the city has to offer before January!

This entry was posted in holidays, nyc travel tips. Bookmark the permalink.