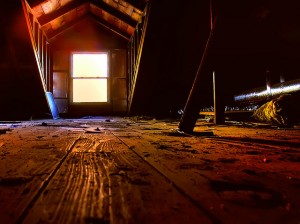 If you are avoiding the boxes and piles of unknown things left behind in the attic, you aren’t alone. Old homes and apartments are known for hiding garbage in the attics, basements, and even the walls. Cleaning out someone else’s trash might give you goosebumps, but what if there is hidden treasure beneath the clutter? It doesn’t happen to everyone, but the chance of finding a precious historical artifact makes cleaning out the home worth all of the dirty work. Here are six shocking discoveries that people have found inside their homes.

While renovating a wall, David Gonzalez of Minnesota found several newspapers insulating the wall. As he pulled out the paper he found a copy of Action Comics #1, a rare comic book from 1938 that featured the debut of Superman. He automatically knew it was worth something and placed it for sale online. The highest bid was $107,333.

While replacing the wiring in a wall, a Canadian family found a pile of love letters from a soldier serving in Europe during World War I. He sent 31 letters to the love of his life, and once he returned home, he apparently hid the letters in the wall of the house, which he built in 1920. The family that found the letters brought them to Dalhousie University, where they are currently being preserved.

Finding love letters and a comic book is one thing, but discovering a Van Gogh painting is miraculous. “Sunset at Montmajour,” painted in 1888, sat in a Norwegian attic for years, as the owners thought that it could not be authentic. Using Van Gogh letters and analyzing the style and materials used, museum experts were able to prove its authenticity in 2013.

I would love to dig around my attic and find money, and Josh Ferrin of Salt Lake City, Utah, did just that. When Ferrin noticed some carpet sticking out of a trap door in the garage’s ceiling, he decided to investigate. He found several ammunition cases against the wall, and as he opened them up, he was greeted with rolls of cash. With $45,000 staring him in the face, he did what any honest person would do: He called up the family he bought the home from, and he gave them the money. What an amazing person!

While cleaning out his New York home, the descendants of George Davis found a life-changing figurine. Inside a box was a beautiful carved Faberge figure trimmed in gold and sapphires. Nicholas II, a Russian czar, had it made for his wife in 1912 for $2,250. When it sold at auction, it shocked everyone with a final sale price of $5.2 million.

Steven Tull made a discovery in his Tennessee attic that was a family surprise and a bit of history. While sorting through boxes and cleaning the attic, he found a tape marked, “Dr. King Interview Dec. 26, 1960.” Curious about what this tape was, he borrowed a player and began listening to it. He was surprised to hear Martin Luther King Jr. talking on the tape in an interview recorded by his own father.

If you come across a piece of history or an unusual item in your home, don’t be afraid to ask questions. Before tossing it in the garbage or sending it to Goodwill, do a little research. Most items made before 1930 have historical value. The year an apartment or home was built is a huge hint towards the authenticity and age of an item. Colleges and museums are great place to ask questions and get advice. Once you decide to sell the item, speak to several appraisers, and don’t sell to the first buyer.

Other items won’t hold a monetary value, but they are still worth keeping. Many people find newspaper clippings in their homes during construction, and whether the papers are worth money or not, placing them in a scrapbook is a fun way to preserve their history and show friends and family members your discovery. There is no way of knowing what you will find in your home until you dig a little deeper!

This entry was posted in Cleaning Tips, Cleaning tutorials. Bookmark the permalink.