Without Proper Hygiene, Food Poisoning Possible From Dining On The Desktop

Posted on August 31, 2011 by Fatima Wiszniewski 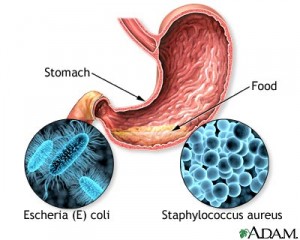 Office workers should take note of a new survey conducted by the American Dietetic Association and Home Food Safety program of ConAgra Foods. In an attempt to save both time and money, 83 percent of Americans eat in their cubical or office. Failure to practice the proper food safety and hygiene could result in time and money exceeding that involved in dining outside of the workplace.

In the survey, 62 percent said they eat lunch at their desks, while 50 percent admitted to daily desktop snacking. An amazing 27 percent choose to eat breakfast at work rather than at home. Possibly, they are eager to start the day but running late could be another reason. Late nights at work have four percent of respondents choosing their desks as their dinner tables.

Though multitasking is admirable, the appeal wanes if it causes foodborne illness. Desktops are a breeding ground for bacteria. In the Home Food Safety survey, 64 percent admitted to cleaning their work areas only monthly or less often. A University of Arizona update to a 2007 survey revealed that an average desktop contains 400 times more bacteria than a typical toilet seat.

If cleaning services do not address desktops properly, workers may find themselves calling out sick. Disinfecting and sanitizing cleaning products should be treated just like a kitchen table or counter. Prior to dining on them, employees should re-clean the surface. The weekly cleaning performed by 36 percent of people responding to the Home Food Safety survey is not enough. A cleaner designed for the desktop surface should be used prior to every meal.

Hand washing should be added to the to-do list of workers who dine in the office. Only 50 percent of Americans always wash their hands prior to lunch. To reduce foodborne illness risks, people should wash their hands with soap and warm water before and after they handle food. The desk inventory should include hand sanitizer and moist towelettes for times when the bathroom is inaccessible. Combined with a clean desktop, clean hands are the best defense for workplace foodborne illnesses.

Cleaning services should also address the office refrigerator when they clean the office. Appropriate cleaning products should be used and refrigerator temperature should be kept at under 40 degrees Fahrenheit. Workers should refrigerate perishable foods within one or two hours, depending on office temperature. When cooking foods in the microwave, they should use a food thermometer to prevent cold spots that could contain harmful bacteria.