Posted on September 30, 2011 by Fatima Wiszniewski 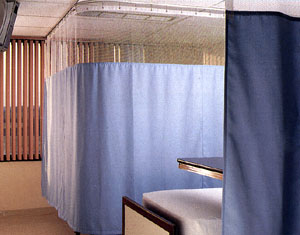 When commercial cleaning services are contracted to handle hospitals, they may find themselves treating some unexpected areas. According to one U.S. study, privacy curtains separating patient care spaces in clinics and hospitals are often contaminated with bacteria, which may include the dangerous superbug MRSA. Healthcare providers and cleaning companies must do their part to avoid spreading these potentially harmful germs.

Michael Ohl with the University of Iowa-Iowa City said it is becoming increasingly recognized that hospitals are major infection transmission environments within the healthcare field. Providers and patients frequently touch privacy curtains, making these contamination sites. After touching a curtain and before dealing with a patient, healthcare providers should wash their hands. Too frequently, the providers touch the curtain again after handwashing and then touch a patient, increasing the chances that germs will spread.

Privacy curtains are often left hanging for a long time and are not easy for commercial cleaning services to disinfect. The study conducted by Mr. Ohl’s team involved taking 180 swabbed cultures from 43 hospital privacy curtains two times per week for three weeks. These curtains were located at University of Iowa hospitals on a medical ward and in the surgical and medical intensive care units. Reuters reported that testing detected MRSA and other Staphylococcus aureus bacteria and various Enterococci bacteria, some of which are resistant to new antibiotics.

The majority of newly placed curtains were contaminated within one week and nearly all curtains were contaminated at least one time. Aside from handwashing, more frequent curtain disinfecting can be effective. Cleaning companies should treat privacy curtains with disinfectant chemical cleaning products on a regular basis. Using curtains made with microbial resistant fabrics should also reduce contamination. MRSA was found on one in five curtains, making steps like these extremely important to reducing the spread of hospital acquired illnesses.

Many hospital curtains hang for longer than a few weeks, increasing the chances that they will become contaminated. The most common bacteria species discovered in the study were Enterococcus, S. Aureus, and various species from the group referred to as gram-negative rods. Cleaning products with disinfectant qualities can effectively reduce the quantity of these germs.

By being more aware of the situation regarding hospital privacy curtains, healthcare providers and cleaning companies can eliminate the spread of bacteria. Patients can also play a role by thoroughly washing their hands after they touch a privacy curtain. Handwashing is the least expensive and most practical way to address this issue.